Kissing the Joy as it Flies 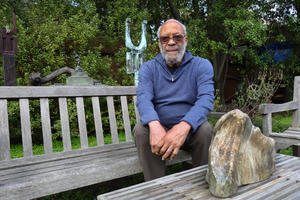 It’s been more than 25 years since Russ Ellis, a Berkeley professor-turned-administrator, served the campus as Vice Chancellor of Undergraduate Affairs. Yet he still recalls, as if they were fresh, the “astonishing” array of problems (personnel, budget, “surprise events that came out of the sky”) he was tasked with resolving. And how, during those years, he’d wake spontaneously before dawn and lie noodling over administrative problems.

“They would form as hundreds of gnats,” he recalls. “Sometimes the gnats would take a pleasing configuration and I would feel that I had solved something.”

A sociologist by training, Ellis was hired in 1970 to do teaching and research on social issues in architecture and urban design, training students in how to gather information on people’s interactions with the built environment. Like administration, the studies he conducted were project oriented, fitting his “project-oriented personality,” as he puts it. “I’m not good at getting out of my planful head.”

Art has helped with that.

Since retiring in 1994, visual arts and songwriting have come to occupy the mental space where gnats once swarmed. “It was available and not crowded with gunk.”

Taking a painting class for more than a decade was “hugely important” to Ellis. At each session the students would discuss their pieces. Most of the work was abstract, yet there were, he discovered, “a million things to talk about.”

At one point his monthly men’s group (now in its fourth decade) held a day-long stone-carving workshop; the art instructor brought carving tools and lumps of Colorado pink alabaster. Ellis liked the outcome and the process. “Stone carving is all removal…. It’s a bit of a mediation – an escape. There’s no way for business to intrude.”

He also experimented with found materials, metal, clay, and bronze – where instead of just subtracting you can “add, subtract, add, add, bend, twist. That was a real challenge, because I’d gotten rolling on another mode.” And, noticing the negative spaces in Styrofoam packaging (the emptiness, say, where a pair of headphones nests), he began using molten wax, then bronze, to transform the packaging cavities into sculptures. 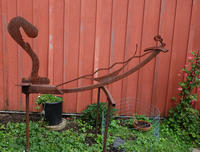 Ellis shares a home in Berkeley with his wife, oral historian and songwriter Julie Gordon Shearer. Their back yard doubles as a sculpture garden displaying dozens of Ellis’ abstract, three-dimensional creations – a venue more to his liking, it turns out, than the gallery scene he dipped his toes in early on.

Now, at 84, he has turned “recently and accidentally” to songwriting – leading to “a few occasions, all recent, where it was just,” as Blake wrote, “‘kissing the joy as it flies.’”

For Ellis, music runs deep. In the early 1960s he performed in the L.A. production of the Obie-winning musical “Fly Blackbird.” For many years he and his family attended the City of Berkeley’s Cazadero Music Camp. At home, on his prized home Hi-Fi equipment, he “drowned” his two kids in sound collections (sounds of the swamp, the wolves, the humpback whale…), along with classical music, blues, and jazz. Both became musicians and his granddaughter Lillian, 11, is with the Grammy-nominated intergenerational “Alphabet Rockers.”

These days Ellis is at work on an album, “Songs From the Garden,” periodically releasing new recordings on the Berkeley Cat Records website. 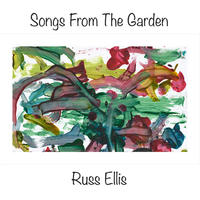 “Oom Chugga” features bird sounds recorded at a local pet shop and a “recitation of deprivations” (“Ain’t got no money/Done lost my honey/My nose is runny/The president’s crazy”) set to a rhythmic chant.

“Eliza” was inspired by a brief encounter with a non-English-speaking Brazilian woman whom Ellis initially took little notice of. Later he reminded himself that “my father’s mother was born a slave and that I had the right to invisibilize no one,” he writes on Berkeley Cat. Three initial notes occurred to him and “a song crowded itself into existence behind them…. It opened me up to singing again, and – newly – to songwriting.”