Congratulations to Professor Emeritus Sheldon Zedeck who has been named this year's chairholder of the Edward A. Dickson Emeriti Professorship. Professor Zedeck is an industrial/organizational psychologist, and Professor Emeritus and Professor of the Graduate School at UC Berkeley's Department of Psychology. He has generously allocated the award for the UC Berkeley Emeriti Association’s Legacy Project, which aims to preserve the recollections and reflections of retired faculty members. Find out more about the Emeriti Legacy Project here:

Edward A. Dickson served as a Regent of the University of California from 1913 to 1946, the longest tenure of any Regent. In 1955, Mr. Dickson presented the University with a gift endowment which enables each campus to make an annual $10,000 award recognizing teaching, research, or public service by one or more emeritus professors, or a salary stipend for emeriti professors on recall. The highest priority is for support of activities that benefit the campus and for which funding is not available from other sources. More about this professorship can be found here: https://academic-senate.berkeley.edu/awards/dickson-history 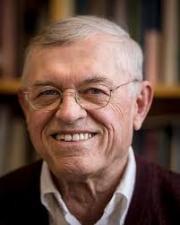 In Memorium: David Wake, renowned evolutionary biologist, professor emeritus of integrative biology at UC Berkeley, and former director of the campus’s Museum of Vertebrate Zoology (MVZ), died on April 29 at his home in Oakland, CA at the age of 84. Professor Wake was the world’s leading expert on salamanders and among the first to warn of a precipitous decline in frog, salamander and other amphibian populations worldwide.

Professor Wake was the director of the MVZ for 27 years, during which he was involved in the redesign of the Valley Life Sciences Building, which houses the MVZ. Over his 57-year career, he discovered and described more than 144 new species of salamander and had four amphibian species named after him.

When Professor Wake retired in 2016 he received the Berkeley Citation, campus’s highest honor for a faculty member. He also was a member of the National Academy of Sciences, American Philosophical Society and American Academy of Arts and Science. Among his honors were the Fellows Medal of the California Academy of Sciences, Joseph Leidy Medal of the Academy of Natural Sciences in Philadelphia and the Grinnell Medal from the MVZ. He served as president of the Society for the Study of Evolution, American Society of Naturalists and American Society of Zoologists.

Jim Patton, Professor Emeritus of Integrative Biology, interviewed Professor Wake in November 2019 as part of the UC Berkeley Emeriti Association's Legacy Project, which aims to preserve the recollections and reflections of retired faculty members. To view this video, go to https://www.youtube.com/watch?v=2yOTw-5W4TY

To read more about the life of Professor Wake, visit
https://news.berkeley.edu/2021/05/04/david-wake-a-prominent-herpetologist-who-warned-of-amphibian-declines-is-dead-at-84/