Once a fundraiser, always an artist.

“I waited my whole life to have nothing to do in the Bay Area,” says UC retiree Nancy Horton. By which she must mean nothing 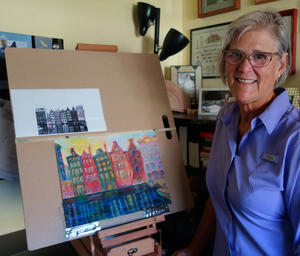 obligatory -- since on any given day she’s writing memoirs of her early years in Alameda (she’s about 70,000 words in). Or plying the Oakland Estuary with her dragon-boat racing team. Or ensconced in her art studio, working from photographs to render – in “crazy” colored chalk pastels on 400-grit sandpaper – an Australian eucalyptus tree with beautiful twisty leaves, say, or a fleet of transport ships that sunk in the estuary in the early 20th century.

Chalk pastels, a recent discovery for Horton, “resonates as my medium,” she says. “Oil paint stinks up the house; watercolor you have to keep it wet and keep going back to it.” Chalk pastels, in contrast, can be applied layer upon layer, yet can be easily removed if need be. “It all comes crumbling off, and then you can do some more. It’s very forgiving.”

Back in high school, Horton aspired to work in the local cannery as her blue-collar dad advised. Her art teacher, senior year, insisted otherwise: “‘No, you’re going to do painting, drawing, and sculpture after school,’” then apply to art school on the strength of that portfolio.

The plan worked out: Horton started art school that summer, on scholarship, and six years later, after piecing together the funding, earned a B.A. in fine art with an emphasis in graphic design. 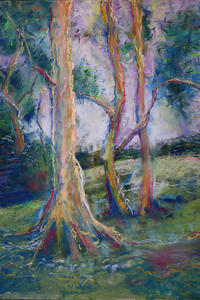 “In my gut, my whole life I’ve thought of myself as an artist,” she says.

That includes all 36 years she worked on campus -- initially in a clerical position and then as a fundraiser for various colleges and departments, including environmental design and engineering. She retired in 2016 as director of annual and corporate programs for the College of Chemistry.

Fundraising was not an obvious choice. Although her good memory proved an asset (“Oh, there’s Bob Smith; he gave us $2,000 last year”), those who knew her may well have thought “‘that's not a good fit for her; she's not an analytical thinker or a number cruncher.’”

True, she says, but “I made fundraising be a job where I could be creative” – gravitating to tasks like event planning and brochure writing that called for creativity. “I tried to keep my creative juices going.”

One incident, early in her campus career, served as road map and inspiration. A generous donor retired from his position as CEO of a large corporation, and a week later sent a postcard announcing a gallery show of his watercolor art. When she asked how he pulled that off, so soon after leaving a demanding job, he told her that he had purposely started taking watercolor classes more than a decade before retiring.

“By the time he retired he had this whole collection of paintings; he made this beautiful transition into retirement,” says Horton. “That clicked in my mind well before I was 30.”

Today the converted bedroom that serves as her studio is chock-a-block with photos, some in black and white, destined to be 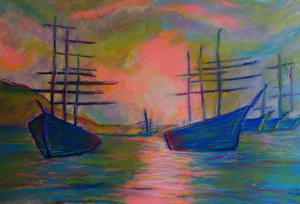 reinterpreted in brightly colored chalk pastels – hot pink, say, or a wild fuchsia. “I’ll just go all hammer and tongs and finish one off” – quickly and with a lot of joy.

“I don’t have delusions that it’s going to make me rich or famous. It’s truly just for me. It’s a huge enhancement to my life.”

Photos:
UC Berkeley retiree Nancy Horton in her home art studio.
Chalk-pastel drawing of an Australian Eucalyptus, based on a photo.
Commercial sailing vessels of the Alaska Packers' Association's "Star Fleet," on the Oakland Estuary, 1900, based on a black-and-white photo.