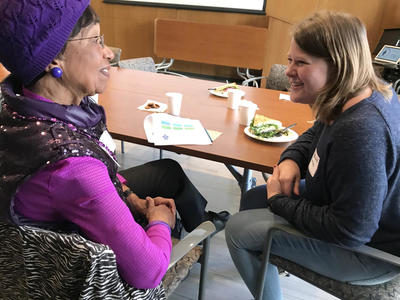 UC Berkeley students and local retirees sat down together Oct. 20 for several hours of lively conversation touching on everything from age-related stereotypes to the legacies each hoped to leave to future generations.

Titled “Intergenerational Dialogue,” the event was organized by the UC Retirement Center, and designed and led by Ashby Village volunteer Charli Depner, in collaboration with third-year Berkeley student Annie Chen, president of Bears for Elder Welfare, a student organization aimed at cultivating elder appreciation among Berkeley students. Undergrads in Bears for Elder Welfare were among the students who showed up to converse with older adults from the community.

From either side of the age divide, the participants – 20 in all – brought a thirst to understand and learn from those who grew up in a different era.

“Living in a college town, I don’t see a family until I’m 10 blocks away from campus,” said Chen, who also serves as a co-facilitator of the DeCal Class “Sociology of Aging: Living, Aging, Dying.” With my friends we talk about midterms,” added undergrad Jody Lee. “I don’t have a lot of opportunities to widen my perspective.”

As one of the “oldsters” in the room, “I’m curious about what’s going on in the minds and imaginations of a younger generation,” noted UC Berkeley retiree Tina Gillis.

In pairs or trios, Gen Zers and Baby Boomers – encouraged to be “interesting and interested”

– responded to structured questions about themselves, their support networks, and how the generations might collaborate to address important challenges. While some worried initially that they might not have enough to say, that fear dissipated as commonalities surfaced and conversation flowed in surprising directions. 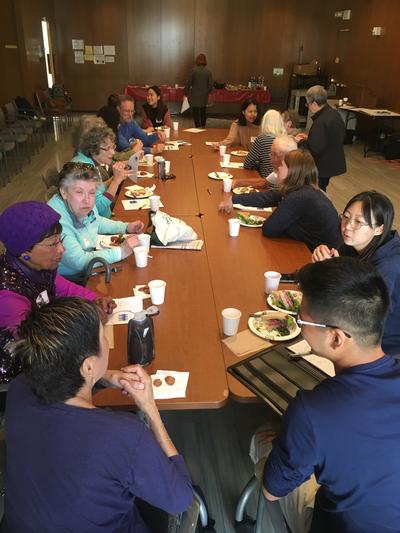 Berkeley undergrad Justin Hoong and Ashby Village member Mary Graham covered “the whole spectrum of life,” as Graham put it – from Hoong’s newfound interest in nutritional science to ways of thinking about death.

Campus retiree Sally Baker spoke of growing up in a small Iowa town that practiced segregation, and writing letters in longhand (“a lost art”) to her family, after leaving home. Her conversational partner, Elisabeth Earley, a recent Cal grad, recalled walks, as a Bears for Elder Welfare member, with a local woman with advanced dementia – moving slowly, deliberately, paying attention to subtle changes in a tree. “It taught me a lot about patience” and the value of a “grounding moment,” Earley said. After her small town, Paradise, Ca., was devastated by wildfire last fall, she has consciously attempted to share a sense of grounding with family and friends “caught up in the post-fire chaos.”

“Emotionally and intellectually satisfying” was how Lee described her exchange with UC retirees Nelle Neighbor-Alonzo and Sarah Jones. “My biggest take-away is how much we need conversations like this,” Chen added.

“I’m passionate about bridging gaps across the divides that are deepening in our society,” said Depner. “We need to find a way to interact with each other. I hope this is a step in that journey.”

The Oct. 20 “Intergenerational Dialogues” was one of a series of "Age Equity for All" partnership events between UCBRC, Ashby Village and student group Bears for Elder Welfare, leading up to a half-day conference on Tuesday, April 21, 2020 (mark your calendars!). Next up: intergenerational board game event March 19, 2020.